Road to Rolling Stone's 500 Greatest Albums of All Time 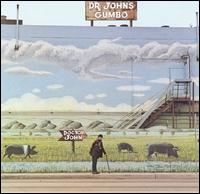 My only real exposure to anything related to jazz came in my undergrad. The professor was a Baroque specialist with a real passion for Buxtehude organ preludes. You can only imagine what this meant for my jazz education, but I now have a rather unique skill of being able to compare John Coltrane to Bach (albeit in a very tangential fashion).

The vocal harmonies, consistent groove-marching rhythm section, tight brass section and sprinkling piano tones do precisely what Dr. John intended – transport you to the sounds of the bayous, where they’re serving blackened catfish for dinner with an appetizer of hard liquor and a dessert of more liquor. What I found most interesting about Dr. John’s version of New Orleans jazz was how… organic it sounded. This is not the jazz you would find under the glitzy lights of Bourbon Street, or in the midst of the Mardi Gras parade. This jazz has a far more earthy feel to it, almost as though you’re on a houseboat or rural front porch somewhere close enough to see the N’Awlins city lights, but not close enough that a bead-bedraggled drunkard is gonna stumble in through your front door.

“Blow Wind Blow” is a fabulous example of this. The arrangement is such that the largest focus is on the instruments that you could hear in just about anybody’s living room – the driving slightly-out-of-tune piano and the hand percussion element that sounds as though someone grabbed a pot out of the kitchen and just started tapping away at it. The same holds true for the whistling coming from the porch swing on “Big Chief”, which when combined with the at best imperfect voice of Dr. John, gives the track, and indeed the album, an undeniable down-home charm.

That’s not to say that this charm is always what you want. Dr. John’s rendition of the Ray Charles classic “Mess Around” is a little bit too white-washed for my taste when it comes to vocals and arrangement. What really shone here was the collaborative nature, passing off solos from piano to vocals to saxophone like it were a basket of bread at a potluck. It was the community, if not the execution, that really carried the day on Dr. John’s Gumbo. Not every song is a knockout, but that’s not the point. The point is the collaboration. It’s being together that counts, not how together you might be.

Speaking as a musician, this is maybe the most important thing you can learn. Too many times, I have met a person who would rather exclude people from the experience of music for the sake of the “sound” of a choir or band. I used to hear stories from music educator friends about teachers who would tell people under their direction to “just mouth along and don’t sing, whatever you do.” These are the people that are a) often kind of a drag to work with and b) are missing the fundamental component that music is a universal language that is meant to be shared with everyone. The goal of this record, a collection of songs from some of New Orleans most celebrated artists, is to tell a story through music about the region and its people. It’s a record of shared experience, shared language, and the desire to share with those who don’t know what this kind of music is all about.

It’s so easy to join the parade with this record. The drums set the pace for you to fall into the procession on “Junko Partner”, and you add your gifts to the parade, no matter what they are. You play the saxophone? Great! Throw it on down. You do a mean two-step? Front of the parade! This is what music is all about: locking eyes with someone across the crowded living room, both of you realizing how wonderfully ridiculous you sound and hollering “LITTLE LIZA JANE!” as hard as you can before being once again being overcome with joyful laughter.

“You know that the lights, is dim/Your shades are way down low/And I knocked and knocked, until my fist got sore,” Dr. John howls on “Somebody Changed the Lock”. He’s not doing that to you. There’s no need to knock on the door. You’re already invited, and we promise that we won’t change the lock on you before you get here. Didn’t bring an appetizer to share? No big deal. You brought yourself, and so long as you can feel the groove and pitch in to the musical gumbo with just the tap of a foot or a smile, let the good times roll.

Grab a seat (if you can find one), and get those toes tapping for “Blow Wind Blow”:

Now get ready to hop right back up again to start that two-step we talked about before. No buts now – you’re doing it.